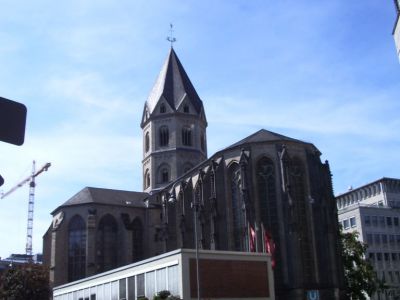 St. Andrew's Church (German: St. Andreas) is one of twelve churches built in Cologne in that period. Archbishop Gero consecrated the church in 974, dedicating it to St. Andrew, although an earlier church at the site was dedicated to St. Matthew. In the 12th century, the church was rebuilt in the Romanesque style and was probably completed after the great fire of Cologne in 1220. This church also features a number of attractive middle age sculptures, paintings, and murals. In the crypt of the church lies a Roman sarcophagus from the 3rd century, which holds the remains of the 13th-century theologian and natural philosopher St. Albertus Magnus. Remains of murals can be found at the nave show’s side chapels. In the 2nd century BC, Maccabeus brothers and their mother were martyred for their faith. You can find all three of them in the Maccabeus shrine that dates back to 1527.

One of the most striking features of this church is its exquisite combination of Gothic and Romanesque styles. It also has an impressive octagonal tower. Enter the gracefully elegant late Gothic choir hall and you will be floored by its sophistication and grandeur. Rich ornamental elements are expertly displayed in the Romanesque section. Do not miss out the late 19th-century dark chancel window additions. The subterranean room is artificially illuminated for a stunning effect. Extremely thin pillars support flat light domes that distribute indirect light.

Why You Should Visit:
Very photographic and a great place to unwind after the hustle and bustle of the train station & the Dom.

Tip:
You can pop into one of the innumerable bars, restaurants and pubs close-by after visiting...
Image by Chris06 on Wikimedia under Creative Commons License.
Sight description based on wikipedia