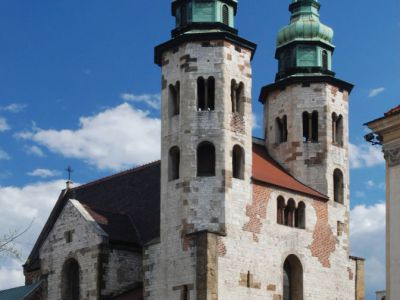 With a modest pale Romanesque exterior, the St. Andrew’s Church is one of the oldest structures in the city. The building dates back to the 11th century when it was built by Palatine Sieciech, a medieval statesman. The Church is one of the best-preserved constructions in the country flaunting its clean Romanesque style. The modern Baroque design rooftops on the towers are, however, a recent addition made in the early 17th century.

Unlike the rather simple exterior, the Church is dramatically different on the inside, transfixing visitors with its ornate Baroque design and decoration. The interiors were redone in the early 18th century by Baltazar Fontana, a sculptor and stucco artist of Italian origin. The elaborate paintings on the walls were done by Karol Dankwart. The Church of St. Andrew is also known for having offered refuge to people during military assaults. It was one of the very few structures that were left standing during the Mongol attack.

Why You Should Visit:
Like most churches in Krakow, this has its interest and charm, and it might even have some have concerts in the evening (circa 8pm) which enhance the experience.

Tip:
Avoid mass times when you should not visit.
Image by Cancre on Wikimedia under Creative Commons License.
Sight description based on wikipedia