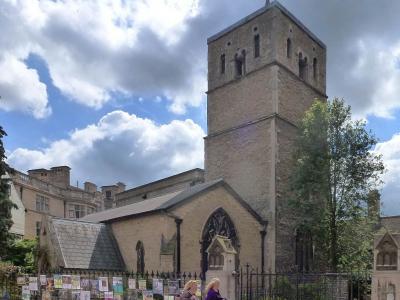 St. Bene’t’s Church stands on the eponymous street, close to King’s and Corpus Christi colleges, and The Backs, an area of parkland around the River Cam to the west. It may not be the most well known of Cambridge’s many historic buildings, but it is in fact the oldest – the church has stood on this site since at least 1050 AD. The church, originally known as St. Benedict’s, is famed for its distinctive Anglo-Saxon square tower, whilst the rest of the building was remodelled in the Victorian era. Michael Ramsey, a former Archbishop of Canterbury, was vicar at St. Bene’t’s until 1938.

An evangelical Anglican church, St. Bene’t’s has always played a key role within the city’s famous university community. The church bells, present in the tower since the 13th century, had been used to call students to lectures and exams throughout the Middle Ages. St. Bene’t’s retains close links with the nearby Corpus Christi College, provides a chaplain for the college to this day. The church holds Holy Communion at 8am on Sundays, with a Eucharist service following afterwards. There is also a regular discussion group at the church, as well as a ‘bring and share’ supper evening each month.
Image Courtesy of Wikimedia and Cmglee.