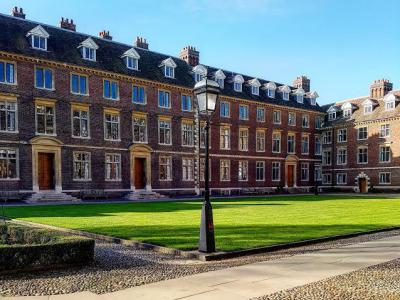 St Catharine’s College, known locally as Cat’s, is situated on Silver Street, between King’s and Queens’ colleges, close to the River Cam. Founded in 1473, St. Catharine’s was known as Katherine Hall until the 19th century. It is named after Saint Catharine, the patron saint of learning. Traditionally a moderately successful college, specialising in theology and philosophy, Cat’s has grown in recent years to become one of the best performing colleges within Cambridge University.

The college is notable for its distinctive three-sided ‘quad’ (an area of grass surrounded by faculty buildings). With the fourth side opening onto Trumpington Street, passers-by are offered a unique view into the centre of a Cambridge college. The existing buildings were built across a century, from 1675 to 1757. There have long been plans to create a fourth building hiding the courtyard from view, so the quad may not be visible for much longer.

The college was one of the first in Cambridge to have a female master – Dame Jean Thomas, who was elected in 2007 and remained college master until 2016. Traditionally a sociable, relaxed place of learning, St. Catharine’s has a number of famous alumni, including TV presenter Jeremy Paxman and actor Sir Ian McKellen. Outside of term time, the historic college is available for hire as a conference centre.

Tip:
You can book one of the guesthouse rooms here to experience how staying in an old heritage college feels like, with breakfast and dinner in the dining hall, college student style, and clean and comfortable rooms (nothing too fancy but very convenient and quite good).
Image Courtesy of Wikimedia and LaurenTho 31.