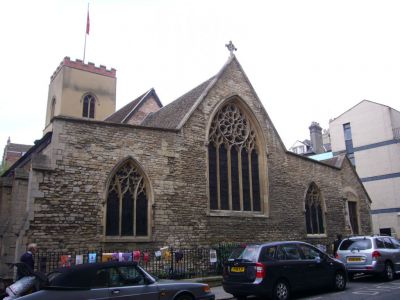 St Edward King and Martyr church stands on Peas Hill in the heart of historic Cambridge, and has been present in this spot since the 13th century. The church is named after Edward the Martyr, King of England in the 10th century and half-brother of his successor, Ethelred the Unready. An Anglican church, St Edward King and Martyr has played a major role in the religious history of England. It is believed to be the site of the first sermon denouncing Catholicism in the UK, and is nicknamed the ‘Cradle of the Reformation’. The English Reformation took place in the early 16th century, and saw English churches denounce the Pope and set up the Anglican church.

The present church building was completed in 1400, and has been extended and restored over the following centuries. The present east window, designed by Sir Gilbert Scott, was added during Victorian era restoration. The church holds three services on Sunday, at 8am, 11am and 5pm. There are also talks and contemporary services held on Tuesday and Wednesday evening, catering for the city’s large student population. St. Edward’s, as it is known locally, prides itself on being a meditative place of worship, and its 5pm Sunday service is based around the Iona and Taize principles of meditative worship.
Image by Magnus Manske on Wikimedia under Creative Commons License.