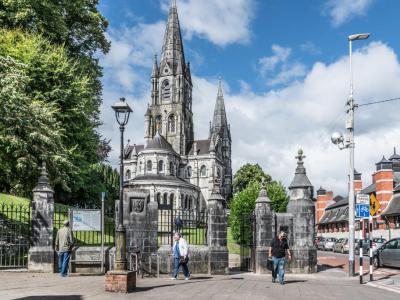 St. Fin Barre's Cathedral is Church of Ireland cathedral with roots that date to the 7th century AD. The first building on the site was a monastery founded by the Fibarr of Cork. It was destroyed in the 12th century during the Norman invasion of Ireland. Two more churches were built on the site, but they were each demolished and replaced by new, larger structures.

The existing cathedral was built between 1863 and 1879. It was designed by architect William Burges in the Gothic Revival architectural style. Along with the building itself, Burges also designed the sculptures, stained glass, mosaics and the bulk of the interior furniture. Most of the external sculptures were designed by Thomas Nicholls.

Burges, worried that the cathedral wouldn't be finished in his lifetime, created a Book of Furniture and a Book of Designs so that the cathedral could be completed to his exact specifications. These books have been used during reconstruction efforts to ensure it remains true to the original vision. This has included the re-carving of some sculptures that have eroded over time.

The interior of St. Fin Barre's Cathedral is just as impressive as the exterior. It has mosaic pavements, a high marble nave and large columns. The pulpit is cylindrical and is perched on four sculpted legs. The brass lectern shows the heads of Moses and King David.

There are 74 stained glass windows designed by Burges. They were crafted by H.W. Lonsdale and William Gualbert Saunders. They each show themes from the Bible except for the nave windows, which have signs of the zodiac. The pipe organ was built in 1870 by William Hill & Sons. It has more than 4,500 pipes.

Visitors can visit St. Fin Barre's Cathedral Monday through Saturday from 10 AM to 1 PM and from 2 PM to 5:30 PM. Along with touring the cathedral, a cathedral gift shop offers souvenirs like coffee mugs, books and miniature replicas of the building.

Tip:
Climb up the steep, dark staircase to be rewarded with a simply stunning view of Cork.
Image Courtesy of Flickr and William Murphy.