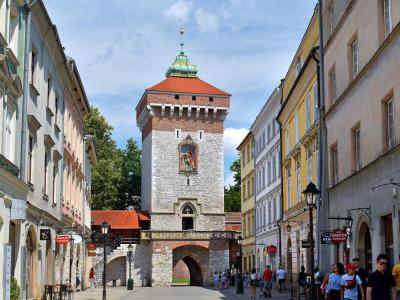 You sense the history of Krakow when you try to imagine what it must have been like to approach its well-defended brick and mortar walls during medieval times. This tower, first mentioned in 1307, had been built as part of a protective rampart around Kraków after the Tatar attack of 1241 which destroyed most of the city. The new construction of city defense features stone watchtowers, fortified gates and a moat.

The gate named after St. Florian became the main entryway to the Old Town. It was connected by a long bridge to the circular Barbican (Barbakan) erected of brick on the other side of the moat. According to records, by 1473 there were 17 towers defending the city; a century later, there were 33. At the height of its existence, the wall featured 47 watchtowers and eight gates. Also, in 1565–66 a municipal arsenal was built next to St. Florian's Gate.

The Gate Tower is 33.5 meters tall. The Baroque metal "helmet" that crowns the gate, constructed in 1660 and renovated in 1694, adds another meter to its overall height. St. Florian's is the only city gate, of the original eight built in the Middle Ages, that was not dismantled during the 19th-century "modernization" of Kraków. The adjoining city walls and two additional, smaller towers had been preserved and today host street displays of amateur art available for purchase.

The south face of St. Florian's Gate is adorned with an 18th-century bas-relief of St. Florian. The tower's north face bears a stone eagle that was carved in 1882 by Polish sculptor Zygmunt Langman, based on a design by painter Jan Matejko. Inside the gate is an altar with a late-Baroque copy of a classicist painting of the Piaskowa Madonna.

Tip:
The Gate Tower is beautiful to see at night when it is lighted.