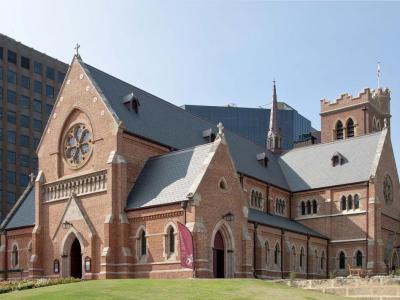 In 2005-2008 the cathedral was extensively restored with the tile roof replaced by slates as originally built. Earthquake protection was added to two walls to provide bracing and much other work was undertaken. Plans are currently underway to restore and develop other buildings in the complex, including the Burt Hall and the 1859 deanery building, which adjoins the cathedral, on the corner of Pier Street. St George's Cathedral has become noted for its innovative and controversial theological teaching, popular preaching, commitment to inter-faith worship and music. Its Cathedral Education Centre is unique to Australia.
Image Courtesy of Wikimedia and Michal Lewi.
Sight description based on Wikipedia.