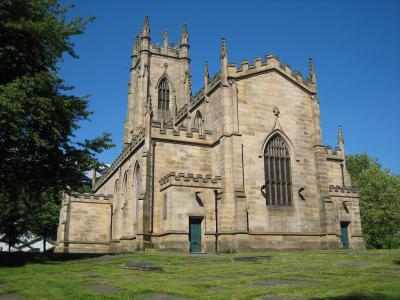 St George's Church is now part of the University of Sheffield and functions as a lecture theater and student housing. It was built in the Perpendicular style, 122 feet (37 m) long and 67 feet (20 m) wide, and consisted of a flat-ceilinged nave with six bays, a single-bay chancel, and a 140 feet (43 m) high tower. Galleries extended the length of the north and south walls, and there was a two-tiered gallery on the west wall. In all, the church could seat 2,000 people. The foundation stone was laid on 19 July 1821, and the church was consecrated by Archbishop Vernon Harcourt on 29 June 1825. It was acquired by the University of Sheffield, and in 1994 it was converted for use as a lecture theatre and student accommodation. Prior to this it had been the last of the Commissioners' churches in Sheffield to retain its original form. It is a Grade II listed building.
Image by JeremyA on Wikimedia under Creative Commons License.
Sight description based on wikipedia