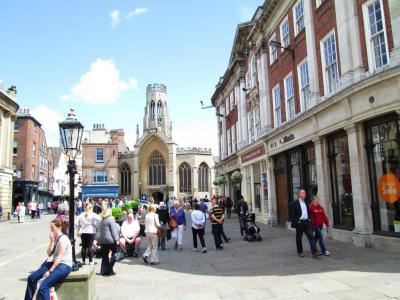 St Helen's Square is an open space in the city centre of York. During the Roman era, Eboracum's south-western gate, the porta praetorian, lay where the square is now located. The square is an important junction, with Coney Street leading from its southern corner, Lendal from the west, both Blake Street and Stonegate from the north, and Davygate from the east.

The south-western side of the square is occupied by the Mansion House, and there is also access to the York Guildhall, which can be seen through a gateway. On the north-western side, both the former Yorkshire Insurance Company and York County Savings Bank buildings were constructed in the mid-19th century and are now listed historical buildings, with the remainder of this side occupied by St Helen's Church.

St. Helen's Church stands out with its unique octagonal tower. The earliest evidence of St. Helen's Church is from the late 12th century, though it is possible to say that its foundation was laid earlier. It was rebuilt twice, in the 1550s and the 1850s. The tower was erected in 1814 and the chancel in 1858. It has a gorgeous interior with 14th and 15th century stained glass.
Image Courtesy of Wikimedia and Dmitrij M.
Sight description based on Wikipedia.