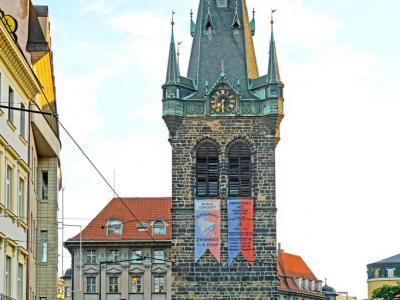 Prague’s tallest freestanding belfry (67.7 m), Jindrisska Tower (Jindrisska vez) is the late Gothic 15th-century landmark that is part of the Church of St Henry and St Kunhuta (Kostel sv. Jindricha a Kunhuty) located in the eponymous Jindrisska street. The street has linked Prague's three major squares – Wenceslas Square, Charles Square and Senovazne Square – since as early as the 14th century. The tower itself was built in 1472–1475 and has sustained several damages over the course of centuries, caused either by foreign invaders (e.g. Swedes in 1648) or natural disasters (a huge storm swept off the roof in 1801). In 1577, the tower had a clock added.

Another unique feature of Jindrisska is its carillon – a set of ten bells, cast in bronze, in the attic. The three most notable bells include the one called Maria, made in 1518 (the oldest), weighting 500 kg; Jindrich, the largest bell, weighting 3,350 kg, cast in 1680; and the one named Dominik, made in 1850 and weighting 1,000 kg.

Other than the sound of a peal, at the top of the tower, one can also enjoy a panoramic view of downtown Prague, extending far and wide towards Wenceslas Square, the Prague Castle and other prominent sights.

Having undergone a total renovation in 2002, the tower is now fully air-conditioned, fitted with electric lighting, staircase and a speedy lift serving its 10 floors. Here, apart from an observation deck at the top, you will find a café, Scottish-themed whiskey bar and a shop, plus a new, two-floor restaurant, built in 2003, decorated with the original timbers of the belfry and offering a unique dining experience, plus a museum and a gallery for art exhibitions.

Being set away from trodden tourist paths, the whimsical Jindrisska Tower offers a chance for a quiet romantic dinner, friendly drink in the bar or delectable dessert with a delicious Italian coffee.