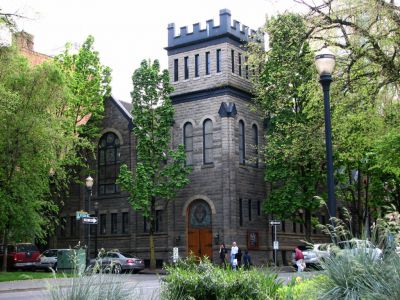 Oregon's first English-speaking Lutheran Church, St. James had its beginning in 1890 in a modest wooden chapel on the corner of SW Park and Jefferson streets in downtown Portland. Over a century later, several significant changes have taken place, with the church having grown from the small, ascetic edifice to a complex that covers over half of a city block.

The Pioneer Chapel was raised in 1891, the main sanctuary was finished in 1907, the education building was completed in 1956 and, finally, the St. James Apartment complex was completed in 1994. Over the years, however, St. James grew not only in size, but in reaching its goal of helping people find themselves.

The St. James building was listed on the National Register of Historic Places in 1975. Stop by to listen to amazing music, hymns and classically-oriented organ, well sung and played. If you're lucky, you can even catch a Jazz Vespers service once a month, featuring some amazing artists.
Image by Werewombat on Wikimedia under Creative Commons License.

Want to visit this sight? Check out these Self-Guided Walking Tours in Portland. Alternatively, you can download the mobile app "GPSmyCity: Walks in 1K+ Cities" from iTunes App Store or Google Play. The app turns your mobile device to a personal tour guide and it works offline, so no data plan is needed when traveling abroad.