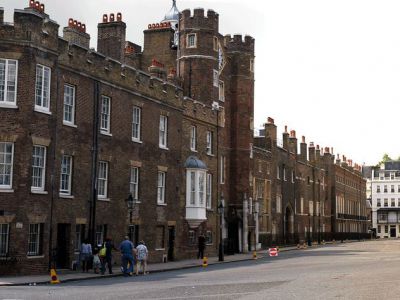 On Pall Mall to the North of St James Park, you will find St James Royal Palace, which is one of the oldest working palaces in the capital.

The palace was commissioned in 1536 by King Henry VIII and is still an official residence of the monarchy, even though no king or queen has lived there since 1837, when Queen Victoria made Buckingham Palace her official London residence.

The palace was built on the site of a sanatorium for lepers, dedicated to St James, hence the name of the palace. Built in the Tudor style of red brick, the palace has four courtyards and a gatehouse at its North end. The gatehouse is one of the few parts of the building that date back to Tudor times, along with a couple of rooms and the Chapel Royal. The main part of the palace was destroyed by fire in 1809, during the reign of King George III.

King Charles I was born there but during the Commonwealth Period, Oliver Cromwell had the place transformed into a prison and barracks. King Charles II restored the palace in 1680 and his brother James II lived there during his short reign as king.

Queen Victoria and Prince Albert were married in the Chapel Royal, which is open to the public. The heart and bowels of Queen Mary I are buried in the chapel. In front of the gatehouse you can have your photo taken next to the Guard from the Household Division.
Image by stu smith on Flickr under Creative Commons License.
Sight description based on wikipedia