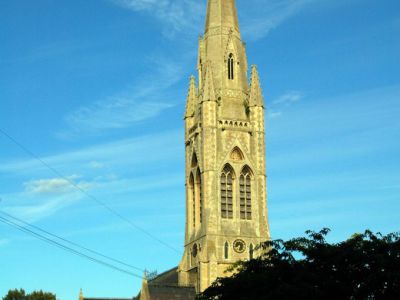 St. John the Evangelist R.C. Church is located on the South Parade in the southeast section of Bath City Centre, in the Old Ham District. The decorative Gothic-style spire dominates the city's skyline, which has irked some people such as noted architectural critic Nikolaus Pevsner who stated the church was "a demonstrative proof of how intensely the Gothicists hated the Georgians of Bath."

The structure was designed and built between 1861-3 by Charles Francis Hansom, who was the brother of J. A. Hansom, the creator of the Hansom cab. The brothers also prepared designs for Woodchester Mansion in Nympsfield, Gloucestershire, after A. W. N. Pugin had resigned from the project. For this reason, they are often quoted as being the second best Roman Catholic architects of their day, for their success in picking up commissions Pugin had passed over. The church's 222 feet (68 metre) spire was added in 1867 by Hansom.
Image by Erebus555 on Wikimedia under Creative Commons License.
Sight description based on wikipedia