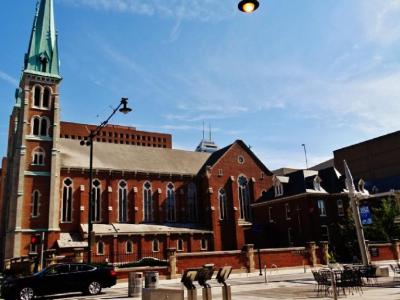 St. John the Evangelist Catholic Church is a parish of the Archdiocese of Indianapolis. The church building and the rectory are listed on the National Register of Historic Places. Considered the mother of the Catholic parishes in Indianapolis, it played an important role in development of the Catholic Church in the city. Saint John's Church served as the pro-cathedral of the diocese from 1878 until 1906; its rectory served as the bishop's residence and chancery from 1878 until 1892. In 1900 the church served as the site of first episcopal consecration held in Indianapolis.

The present site on which the church was built was purchased in 1846, and the parish built its second church there. When it became too small, Dietrich Bohlen was hired to design the present church.Bohlen's son, Oscar, designed the twin spires and supervised their construction in 1893. The red-brick church has an eclectic style, including elements of French Gothic Revival and American Romanesque Revival architecture. The sanctuary has a seating capacity of 3,000. It was the largest church in Indiana when the cornerstone was laid in 1867; it was dedicated on July 2, 1871.
Image Courtesy of Flickr and Catedrales e Iglesias/Cathedrals and Churches.
Sight description based on Wikipedia.