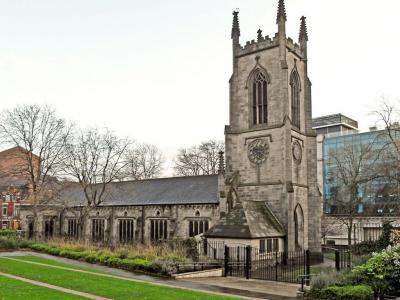 St John the Evangelist's Church is designated by English Heritage as a Grade I listed building, and is under the care of the Churches Conservation Trust. The architectural historian Nikolaus Pevsner refers to it as "the only church at Leeds of more than local interest". The church is built in ashlar stone, and has a grey slate roof. Its plan consists of a nave with a south aisle and a south porch, a chancel, and a west tower. The whole of the exterior of the church is embattled with pinnacles at the corners. Its architectural style is Perpendicular. On each side of the church are four-light Perpendicular windows, with five-light windows at the east ends of the nave and aisle, and at the west west end of the aisle. Most of the fittings are Jacobean in style, and have been described as the "glory" of the church. This applies particularly to the elaborately carved screen across the nave and the aisle. There is similarly detailed carving on the wall panels, the pews and the pulpit. Also in the church is a royal coat of arms and three brass chandeliers.
Image by Tim Green aka atoach on Flickr under Creative Commons License.
Sight description based on wikipedia

Want to visit this sight? Check out these Self-Guided Walking Tours in Leeds. Alternatively, you can download the mobile app "GPSmyCity: Walks in 1K+ Cities" from iTunes App Store or Google Play. The app turns your mobile device to a personal tour guide and it works offline, so no data plan is needed when traveling abroad.

Leeds is a city with a rich heritage and history. The city has numerous important statues and monuments, some of which are hundreds of years old but still in remarkable condition. Take this self-guided walking tour to discover the most significant and attractive statues and sculptures of the city.

Leeds is a lively historic city with a large variety of music events, art exhibitions and other cultural activities. Leeds' rich heritage, traditions and unique culture make this city a charming tourist destination with plenty of famous theatres, lovely cinemas and concert halls, art galleries and museums. The following walking tour will help you discover the most popular cultural venues of...  view more

Leeds is an old, charming city with many places of worship to see and visit, each with its own history. Leeds religious buildings have been the city’s most prominent landmark for centuries. Take this self-guided walking tour to visit the city’s most visited churches.

The city of Leeds has plenty of architectural variety to offer. Most of the city’s significant architectural jewels such as Leeds Town Hall and Civic Hall belong to the Victorian era. However, Middle Ages and 20th century architectural designs have also left their mark on this charming city of architectural landscape. Take this self-guided walking tour to see the magnificent Leeds architecture.

Leeds is a vibrant city with lots of character and diversity. There is something for everybody to enjoy here, whether it is a relaxing walk in Lovell Park or a journey to the city’s glorious industrial past in Armley Mills Industrial Museum. Take this self-guided tour to check out Leeds’ attractive places that give this city a positive and unique vibe.