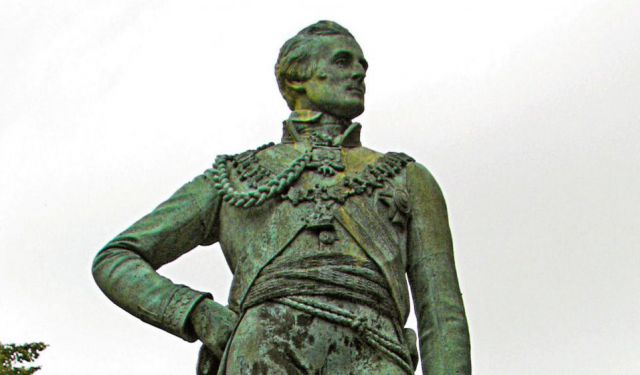 Image by Chemical Engineer on Wikimedia under Creative Commons License.

Leeds is a city with a rich heritage and history. The city has numerous important statues and monuments, some of which are hundreds of years old but still in remarkable condition. Take this self-guided walking tour to discover the most significant and attractive statues and sculptures of the city.
How it works: Download the app "GPSmyCity: Walks in 1K+ Cities" from iTunes App Store or Google Play to your mobile phone or tablet. The app turns your mobile device into a personal tour guide and its built-in GPS navigation functions guide you from one tour stop to next. The app works offline, so no data plan is needed when traveling abroad.

Robert Peel Statue is another monument in Leeds built in commemoration of the British statesman. Sir Robert Peel served as Prime Minister of the United Kingdom at the beginning of the 19th century. He is also known to have established the modern concept of “bobbies”, police force officers, which is still being used and created the base for the formation of the Conservative Party.
Image by Chemical Engineer on Wikimedia under Creative Commons License.
2

A monument to one of Britain's most prominent royal characters, Queen Victoria, designed by George Frampton in 1905, is situated near Leeds' Woodhouse Moor Park. The Queen's reign, known as the Victorian era, was the period of stability and progress in every department: industrial, cultural, political and military. Queen Victoria earned the nickname “grandmother of Europe” after many of her nine children and forty-two grandchildren had married royal families across Europe. Queen Victoria ruled longer than any other female monarch in history.
Image by Tim Green aka atoach on Flickr under Creative Commons License.
3

3) The Duke of Wellington Statue

Since 1937, The Statue of the Duke of Wellington is situated in the green area of Woodhouse Moor Park. It was designed by Carlo Marochetti in 1855. Born in Ireland, Arthur Wellsdley, often referred to as 'The Duke of Wellington', was one of the most prominent political and military characters of Britain in the 19th century.
Image by Chemical Engineer on Wikimedia under Creative Commons License.
4

The statue of Sir Peter Fairbairn was crafted by Matthew Noble in 1868 in honour of the former Mayor of Leeds who lived nearby in Woodsley House. Peter Fairbairn ran the Wellington Foundry, then became counselor, followed by his historic welcoming of the Queen Victoria. Mayor Peter Fairbairn was knighted back in 1858 when the queen came to the city for the opening ceremony of Town Hall.
Image by Tim Green aka atoach on Flickr under Creative Commons License.
5

Situated outside Nuffield Hospital, The Human Spirit is another interesting sculpture designed by Faith Babbington in 2002. It depicts four linked men in unity and symbolizes human spirit. This interesting statue catches the eye of people walking by and generates numerous theories about the symbolization of this concept.
Image by Mtaylor848 on Wikimedia under Creative Commons License.
6

Settled on the Leeds City Square, the monument of Edward of Woodstock is another popular city landmark glorifying the city's prominent historic character Edward of Woodstock, also known as Black Prince. Depicted on a horse, the Son of King Edward III was a skillful military commander. His victory over the French at Poitiers in 1356 was the turning point in the One Hundred Years' War, when France had to pay a ransom twice the country's yearly income. Edward of Woodstock died in 1376 before his father the King, hence never becoming the King of England.
Image by Green Lane on Wikimedia under Creative Commons License.
7

Pentaque Statue is situated on one of popular central Leeds squares of Bond Court. The bronze figures are depicted here playing an old English bowl game. Sculptor Roger Burnett's creation keeps the tradition of old British sport alive and interacting with people people walking by. There is a similar statue situated by the canal at Sowerby Bridge where the famous sculptor's studio is located.
Image by RichTea on Wikimedia under Creative Commons License.
8

To mark the new millennium Leeds Civic center proposed a monument to be erected and let the public decide who is city's real hero. Second World War bomber pilot Arthur Aaron won the vote. He was one of few military servicemen from Leeds to have won the most prestigious military award of Victoria Cross. The 5-meter bronze sculpture made by Graham Ibbeson depicts the pilot standing near the tree, up which several children climbing, representing generations that have past since the end of war, with the last child releasing the dove of peace.
Image by Green Lane on Wikimedia under Creative Commons License.

The city of Leeds has plenty of architectural variety to offer. Most of the city’s significant architectural jewels such as Leeds Town Hall and Civic Hall belong to the Victorian era. However, Middle Ages and 20th century architectural designs have also left their mark on this charming city of architectural landscape. Take this self-guided walking tour to see the magnificent Leeds architecture.

Leeds is a lively historic city with a large variety of music events, art exhibitions and other cultural activities. Leeds' rich heritage, traditions and unique culture make this city a charming tourist destination with plenty of famous theatres, lovely cinemas and concert halls, art galleries and museums. The following walking tour will help you discover the most popular cultural venues of...  view more

Leeds is a vibrant city with lots of character and diversity. There is something for everybody to enjoy here, whether it is a relaxing walk in Lovell Park or a journey to the city’s glorious industrial past in Armley Mills Industrial Museum. Take this self-guided tour to check out Leeds’ attractive places that give this city a positive and unique vibe.

Leeds is an old, charming city with many places of worship to see and visit, each with its own history. Leeds religious buildings have been the city’s most prominent landmark for centuries. Take this self-guided walking tour to visit the city’s most visited churches.