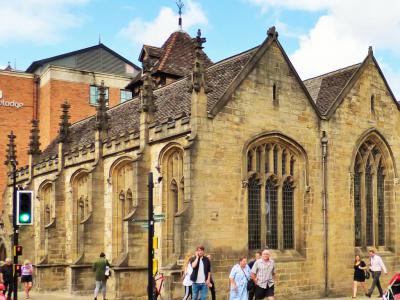 The earliest parts of St. John’s Church, including the tower base, date back to the 12th century, while the chancel was built in the 14th. Much of the rest of the building appeared in the 15th century, when the north aisle and arcade were rebuilt, and the west end extended.

In 1551, the tower collapsed and part of the north aisle had to be remodeled. The church was further reconstructed in 1850 by George Fowler Jones, when the south porch was added, and the east end was rebuilt to make space for widened North Street. Some extensive restoration – such as re-glazed windows, a new floor laid, and new pews added – also took place during that period. In 1866 the nave was re-roofed.

The church closed in 1934 and became the Institute of Architecture of the York Academic Trust, which merged with the University of York. The university used it as the Arts Centre in the 1960s, but it was subsequently sold and now houses a bar called the Parish. One notable feature is its old church bells, which are still occasionally rung.
Image Courtesy of Flickr and grassrootsgroundswell.
Sight description based on Wikipedia.