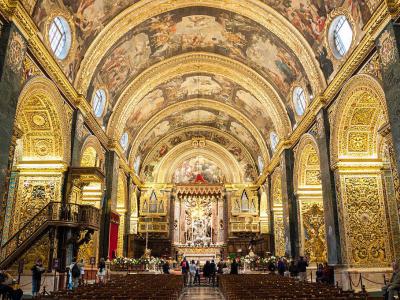 St. Johns Co-Cathedral was built by the Knights of Malta between 1573-1578, having been commissioned in 1572 by Grand Master Jean de la Cassière as the conventual church of the Order of the Knights Hospitaller of St John, known as the Knights of Malta. The Church was designed by the Maltese military architect Glormu Cassar who also designed several other prominent buildings in Valletta.

The exterior of the Cathedral, built shortly after the Great Siege of 1565, is reminiscent of a military fort.

The interior, in sharp contrast with the facade, is extremely ornate and decorated in the height of the Baroque period. Preti designed the intricately carved stone walls and painted the vaulted ceiling and side altars with scenes from the life of St John. Interestingly, the figures painted into the ceiling next to each column initially appear to the viewer as 3-dimensional statues, but on closer inspection, we see that the artist cleverly created an illusion of 3-dimension by his use of shadows and placement. Also noteworthy is the fact that the carving was all undertaken in-place rather than being carved independently and then attached to the walls.

Tip:
Get there early! This is a very popular attraction and the groups and cruise ship passengers are already starting to descend by 10:30 or so.