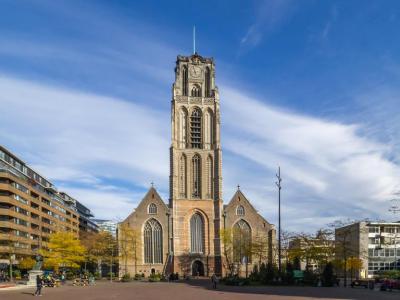 St. Lawrence Church is Rotterdam's only remaining medieval building. Construction began in 1449, and the church was completed in 1525. The church was Rotterdam's first all-stone building. The tower was originally added in 1621 and rebuilt several times.

When the Reformation took place in 1572, the church became a Protestant church.

Bombs heavily damaged the church during World War II. Only the tower and walls survived the Rotterdam Blitz. Residents were divided on whether to rebuild the church or not. However, Restoration work began in 1952 and was completed in 1968. The church is now a mix of original and rebuilt architecture.

Church services resumed in 1971 when the Laurenpastoraat community was founded. Today, the church hosts Laurenpatoraat and Masskant/Open Grenzen community services.

St. Lawrence Church is home to a permanent exhibition that focuses on the city's history. The exhibit is spread across 20 different sections in the church's side chapels. Exhibits feature objects and audiovisuals that describe the city's past, the World War II bombings, and the church's reconstruction.