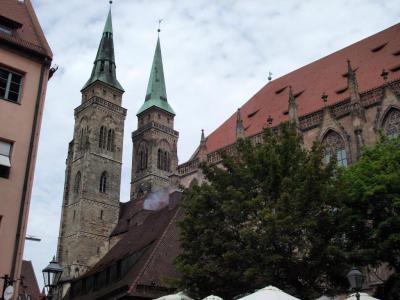 Dedicated to one of the most venerated saints of the Roman Catholic Church, this church was badly damaged during World War II and later restored, now standing as one of the most prominent among the Evangelical Lutheran churches in Bavaria. More notably, the church is rich in 14th and 15th Century altarpieces, the earliest dating from 1316.The church’s Gothic choir called "St. Laurentius" was designed by medieval master mason Konrad Roriczer in 1445. There are also notable sculptures, including the famous statue of the "beautiful Madonna" – unusually portrayed smiling – from around 1280. Most striking is a stunning stone tabernacle, (built 1493-6) the carvings of which depict the Passion of Christ. It is surmounted by a veritable explosion of pinnacles which soar 20m to the springing of the vaulting. As if this were not enough, the church has an exceptional array of medieval stained glass, mostly from the 15th century.

The building and furnishing of the church were cared of by the city council and by wealthy citizens. This is probably the reason why the art treasures of St. Lawrence were spared during the iconoclasm during the Reformation period. Despite St. Lawrence's being one of the first churches in Germany to be Lutheran (1525), the wealthy citizens of Nuremberg wanted to preserve the memory of their ancestors and refused the removal of the donated works of art.

The west facade is richly articulated, reflecting the wealth of the Nuremberg citizens. The facade is dominated by the two towers, mirroring St. Sebald and indirectly Bamberg Cathedral with a sharp towering West portal doorway, and an indented rose window 9 metres in diameter.

Why You Should Visit:
If you want to escape all the shoppers and summer heat outside, this is the cool place to relax for a while.
A must-see in the day, evening, and at night for the variety of lighting that makes it almost magical.

Tip:
Try to find the opportunity to join a church concert. Typically on every Saturday.