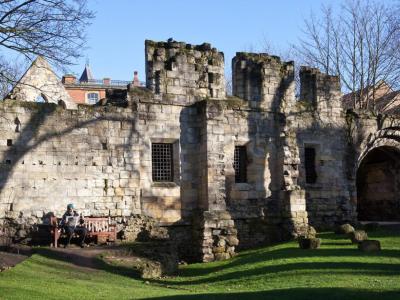 Tucked into the north-eastern corner of Museum Gardens in York are the ruins of what was once the largest medieval hospital in northern England. At the time it was an important institution run by the community of the Augustinian Order.

The remains in Museum Gardens occupy the western corner of the Roman fortress of Eboracum and are probably part of the hospital infirmary, built by John Romanus, the Treasurer of York Minster, sometime between 1225 and 1250. It was built on the site of an earlier hospital of St Peter which, according to tradition, was established by King Athelstan around 937 AD and was destroyed by fire in 1137. King Stephen rebuilt the hospital church and dedicated it to St Leonard, whereas the hospital itself was called St Peter's for another century.

Records show that life at St Leonard's was akin to a monastery. During the 14th century the hospital was run by 18 clergy (13 chaplain brothers aided by regular sisters and lay brothers), 30 choristers, and servants, and contained beds for as many as 240 patients, provided by private benefactors. Apart from caring for the ill, it also distributed food to the poor as well as prisoners in York Castle.

As a religious institution, St Leonard’s fell victim to Henry VIII's Dissolution of the Monasteries. After it was closed and destroyed, the city of York was left without hospital for another 200 years, until 1740.

Today all that is left is the entrance lobby, undercroft and part of the hospital chapel. The undercroft interior has a beautifully vaulted rib ceiling and houses a collection of Roman and medieval stonework. Part of the chapel features a lovely three-light window.
Image Courtesy of Flickr and alh1.
Sight description based on Wikipedia.