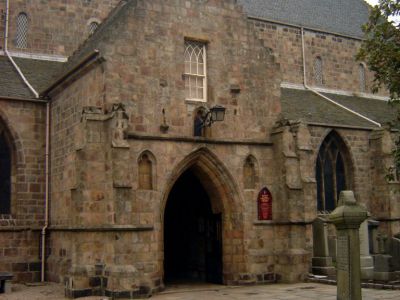 St Machar's Cathedral, sometimes called Old Machar, is a Church of Scotland church. The church is named in honor of St. Machar who was said to have accompanied St. Columba on his travel to Iona. The legend states that, on this journey, God told Machar to establish a church at the River Don. St. Machar is said to have founded the church in the year 580.

A cathedral was built on this site in 1131. It was replaced in 1290 with the current Early English style building. Work continued on the cathedral for more than 150 years before it was fully functional. During that time, a quarter of Sir William Wallace's remains were interred in the walls of the cathedral. The church was finally completed in 1530.

Visitors to the church will find a stone interior with massive gothic archways. There are multiple stained glass windows throughout the church with dates that range from 1870s to 1970s. The Sanctuary Cross in the south aisle is a conglomerate from a 21st century shaft and a 12th century head. The Barbour Tryptich, made from wood, was created by Roland Fraser in 1997.

The three effigies are some of the most striking features of the church. These effigies represent three clerics that date to the 1400s. They were previously held outside of the church but were moved to the interior during one of the many restoration projects.

A number of notable Scottish individuals have been interred on the church grounds and inside the building itself. Along with William Wallace, some of these burials include John Joy Bell, James Edward Crombie, George Dickie and David Gill.

Why You Should Visit
See the beautiful stained glass cathedral, enjoy the English and gothic architecture, and pay respects to some of Scotland's most notable individuals

Tips
The church is open to visitors from 10 AM to 4 PM Monday through Saturday. Sunday visitors are welcome from 2 PM to 5 PM.
Image by Mike Christie on Wikimedia under Creative Commons License.