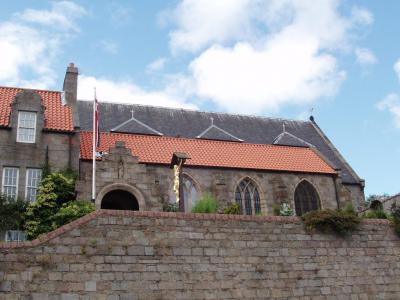 St Margaret Of Scotland Episcopal Church is also known as St Margaret’s Gallowgate, because it is located in the historically-poorer area of the city. The church was founded in 1867 as a mission church by Father John Comper, a follower of the Oxford Movement. Comper was at that time rector of St John’s Aberdeen’s oldest Anglican congregation. The original church was a room rented by Comper on the Gallowgate. In 1870 Comper became the full-time priest to the newly formed church of St Margaret's. In 1879, a separate school was built followed by the St Nicholas chapel and rectory in 1898 and 1906 respectively, designed by Comper's son, J. Ninian Comper.
Image by Stuart Caie on Flickr under Creative Commons License.
Sight description based on wikipedia