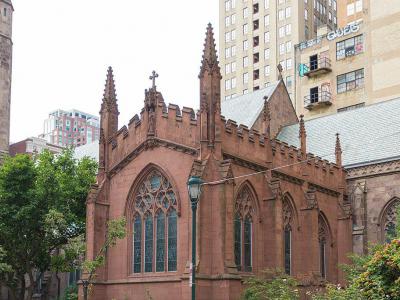 The Lady Chapel designed by Cope and Stewardson in the late decorated Gothic style, was built in 1900. The chapel's the ceiling is the first known example in the US of a stone vault. Both construction of the chapel and its furnishings were donated by Rodman Wanamaker in memory of his late wife. Because of its architectural quality and significance, the building has been designated a National Historic Landmark.
Image by Paul R. Burley on Wikimedia under Creative Commons License.
Sight description based on wikipedia

This sight is featured in a self-guided walking tour of Philadelphia, Pennsylvania within the mobile app "GPSmyCity: Walks in 1K+ Cities" which can be downloaded from iTunes App Store or Google Play. Please download the app to your mobile phone or tablet for travel directions for visiting this sight. The app turns your mobile device to a personal tour guide and it works offline, so no data plan is needed when traveling abroad.