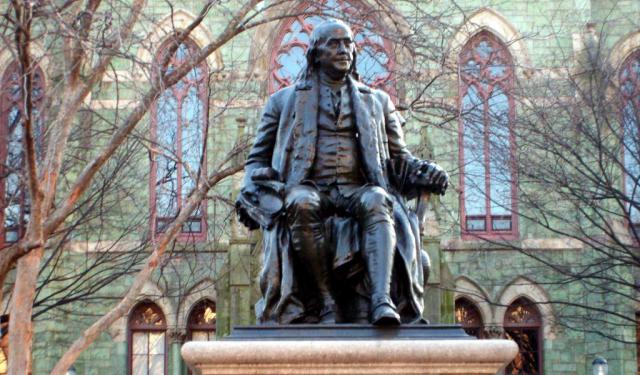 Benjamin Franklin was arguably the most fascinating personality in Revolutionary America. He left his Puritan family in Boston as a teenager and came to Philadelphia for a new life. What a fascinating life it turned out to be. He was a writer, printer, philosopher, postmaster, scientist, inventor, statesman, and diplomat. His life was the absolute purist version of the American Dream. He influenced people from all walks of life, from the bottom to the top. He was the mentor of all the Founding Fathers. He could have been the first U.S. President if he wasn't in his 80s and at the end of his life. Take this self-guided tour to walk in Benjamin Franklin's footsteps in the City of Brotherly Love.
Image Courtesy of Wikimedia and MatthewMarcucci.
How it works: Download the app "GPSmyCity: Walks in 1K+ Cities" from iTunes App Store or Google Play to your mobile phone or tablet. The app turns your mobile device into a personal tour guide and its built-in GPS navigation functions guide you from one tour stop to next. The app works offline, so no data plan is needed when traveling abroad.

Everyone knows about the Second Continental Congress that signed the Declaration at Independence Hall, but hardly anyone ever talks about the First Continental Congress which, of course, was super important, as it marked the first time that the 13 Colonies got together (well, as many as possible) in one spot in defiance of British rule. This is where Ben Franklin and others secretly met – keeping all shutters closed in the summer heat – with the first French contacts to discuss French support for the American Revolution. So, for that fact alone, this location is very important to the nation's founding history. It was also host to such venerable institutions as Franklin's Library Company, The American Philosophical Society, as well as the First and Second Banks of the U.S., that later established themselves at other locations.

However, it was also (and still is) the actual structure built by and for the Carpenters' Guild, and the exhibits inside reflect primarily the "carpenter" aspect, although there is also some information about the First Congress. Both aspects of the building are very interesting indeed, and the Hall itself is quite splendid to see. There is a replica Speaker's chair (from the First Congress) you can sit in, and there are explanatory signs around the perimeter – though staff inside is excellent and can answer any question you would have concerning the property. No charge here but visitors can purchase interesting gifts in the well-stocked shop. The grounds are quite lovely, too.

Tip:
Spend some time outside at the Storytelling Bench, listening to the wonderful storyteller. The benches are really a wonderful idea and it's fun to look for them!

The Benjamin Franklin Museum lies in the fully-enclosed courtyard where the Founding Father's house and print shop once stood. Although these were torn down long ago, some archaeological remains were excavated and are visible beneath glass windows in the ground along with explanatory signs.

"Ghost" houses were built in the exact spots where the house and print shop once stood, so one gets a real sense of how the site would have looked when those structures were standing. There is also a working 18th-century print shop adjacent which is a neat experience.

It doesn't cost anything to walk through Franklin Court, view the "ghost" houses, or visit the working print shop. The museum costs a very reasonable fee. While the space is not huge, it provides a very thorough and interesting overview of Franklin's life and contributions to the country. There are lots of interactive objects for kids and fascinating things to see, read, and ponder for adults.

The visitors can get both an overview of Franklin's life, as well as little interesting tidbits of trivia about him. They even have entertaining videos illustrating some humorous (and informative) episodes in his life, which seem to be everyone's favorite part. All in all, there is something for everyone, regardless of age.
Image Courtesy of Flickr and Rain0975.
3

The City Tavern offers great food, fantastic service in period dress, and an outstanding atmosphere. Though not the original built-in 1773, but a historically accurate replication from 1976, you would be hard-pressed to know.

The original suffered fire damage in 1834 and was razed in 1854. Congress petitioned the Independence National Historical Park to preserve and protect this property, literally one where the Founding Fathers dined, drank ale, and argued political philosophy. Curiously, it was Ben Franklin who introduced tofu to the Americas, and the tofu pasta inspired by his recipe can be enjoyed in his private dining room.

Guests can stay inside for the colonial ambiance or choose to dine outdoors in the back garden area. The restaurant also features an acclaimed kids' menu, so a visit here with young ones isn't just about the historical and educational experience.
Image Courtesy of Wikimedia and Smallbones.
4

Housed in an old firehouse that was operational between 1902-52, this unique museum was designed for the Bicentennial to showcase Philadelphia's rich firefighting history and the first organized volunteer fire company in Colonial America – the Union Fire Company – established by Benjamin Franklin in 1736. Another reminder that the Founding Father had a hand in everything!

The building still contains the original brass sliding pole used for quick access to fire trucks. Several other pieces of old equipment are on display, including an 1896 hook-and-ladder, a 1903 high-pressure Cannon Wagon, and a 1907 steam-powered pumper. Of special note are two well preserved hand-pumpers – one from 1815, and the other from 1730. Also on display are axes, saws, nozzles, old fire plaques indicating insured buildings, and leather fire hats from the early 19th century. A large stained-glass window memorializes fallen firefighters.

Opening Hours:
Tue-Sat: 10am–4:30pm
Image Courtesy of Wikimedia and Beyond My Ken.
5

Christ Church Burial Ground in Philadelphia is an important early-American cemetery, which is still active. Despite the name, it is actually three blocks west of Christ Church. The land was acquired in 1719 when the church's property was full, and the new land was on what was back then considered the outskirts of town.

Christ Church is an Episcopal church founded in 1695, and it was the place of worship for many Revolutionary War participants, including George Washington.

Here is the final resting place of many historic national figures and prominent Philadelphians, including Benjamin Franklin and his wife Deborah, as well as four other signers of the Declaration of Independence: Benjamin Rush, Francis Hopkinson, Joseph Hewes, and George Ross. Two more signers (James Wilson and Robert Morris) are buried at Christ Church itself.

The Burial Ground is open to the public for a small fee. When the Burial Ground is closed, one can still view Benjamin Franklin's gravesite from the sidewalk at the corner of 5th and Arch Streets through a set of iron rails. The rail opening in the brick wall was added for public viewing in 1858 at the request of the Franklin Institute.

It is an old Philadelphia tradition for people to leave pennies at Franklin's resting place.

Further away from Franklin, the visitors can see a small but neatly kept space with lesser-known graves, some of which are also quite interesting.
Image Courtesy of Flickr and Eden, Janine and Jim.