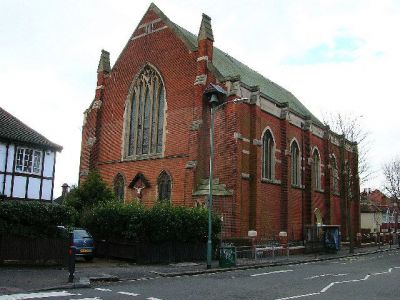 St Mary and St Abraam Church is a Coptic Orthodox Church in Hove, in the English city of Brighton and Hove. It is one of 27 such churches in the British Isles, twelve of which are British Orthodox churches. The Race community in Brighton and Hove was founded in 1990; four years later it moved to its present site on Davigdor Road, on the Brighton/Hove border.

The tall red-brick building, in Early English style, has a large pointed-arch window in its eastern face and five smaller windows across the northern face, where the entrance is situated. The last service was held on 17 January 1993, and the church was declared redundant on 20 July 1993.The church has some noteworthy interior features. An enormous mahogany and oak iconostasis was installed in 2000: at 7.5 meters tall, it is said to be the tallest such structure in the world. Pope Shenouda III returned to the church on 13 August 2000 to dedicate the iconostasis, which depicts the Last Supper, Jesus Christ and several other holy figures across 24 icons. Father Zakaria Henein, an Egyptian priest who was in charge of the church at that time, also painted a large icon of Christ above the altar, despite having no formal art training.
Image by Simon Carey on Wikimedia under Creative Commons License.
Sight description based on wikipedia