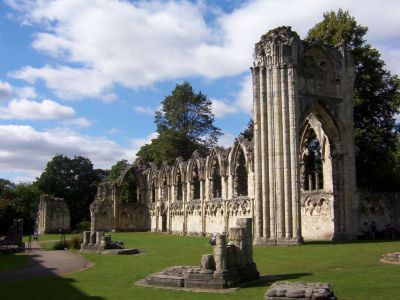 Once the richest abbey in the north of England, St Mary's lies in what are now the York Museum Gardens, on a steeply-sloping site to the west of York Minster.

The abbey dates back to 1086 and over time became the wealthiest monastery in northern England before it was dissolved by Henry VIII in 1539. Over the next 200 years, it fell into disrepair and was largely dismantled for its stone. Stones from the abbey can be seen lining paths throughout the York Museum Gardens, but the major ruins of the church are on the west side.

All that remains today of St Mary's are the north and west walls, plus a few other remnants: the half-timbered Pilgrims' Hospitium, the West Gate and the 14th-century timber-framed Abbot's House (now called the King's Manor). The remains of the Abbey were described by Edwin Ridsdale Tate in a 1929 publication in which he asserted that: "Nowhere in England is there another spot so full of charm as York and where in York is there a more charming spot than the Gardens of the Philosophical Society, in which stand the beautiful fragments of that once powerful and noble monastery of St. Mary's. Here we must leave the venerable pile in the evening of its glory."

Why You Should Visit:
Beautiful, tranquil, and so close to the centre that you can fit it into whatever else you are doing on your trip to York.

Tip:
Go into the Yorkshire Museum, itself a good place to go, and you get to go below to see even more of the Abbey which would be underground. Excavated finds and architectural features, particularly relating to the warming house and late 12th-century chapter house as well. Mesmerizing.
Image Courtesy of Wikimedia and Kaly 99.
Sight description based on Wikipedia.