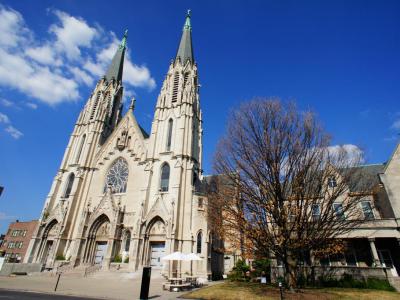 Architect Hermann Gaul, a native of Cologne, Germany, designed the church. Gargoyles decorate the façade of the church at the entry portal and towers. On the north side, a stained-glass window depicts St. Boniface, the saint who converted the Germans to Christianity. On the south side, another window depicts St. Henry, the “church builder.” The interior has many statues and a apse with skylights.
Image Courtesy of Wikimedia and Vintagejhan.
Sight description based on Wikipedia.