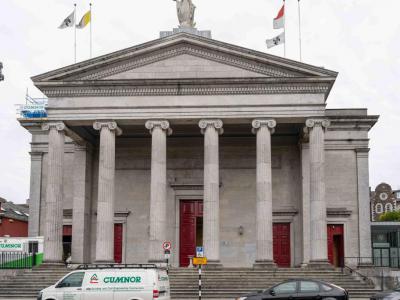 This church was dedicated in 1839 and had the portico added in 1861. The architect, Kearns Deane, delivered the project free of charge, even though he himself wasn't a Catholic. This fine piece of architecture has six fluted Ionic columns supporting a pediment surmounted by statue of Our Lady, created by James Cahill from Dublin. The building is constructed mostly of white limestone. The interior features sixteen fluted pillars along the nave and sanctuary. There are also four red 3.5 metre pillars of polished Aberdeen granite. The altar is adorned with a 14th century statue of Our Lady of the Graces which reportedly has miraculous powers. This fairly small statue originated in northern France and is said to have arrived in Ireland in the 15th century, floating in a log into Youghal harbour, where it remained until was taken to St Mary's.
Image by pl:Wikipedysta:A. on Wikimedia under Creative Commons License.