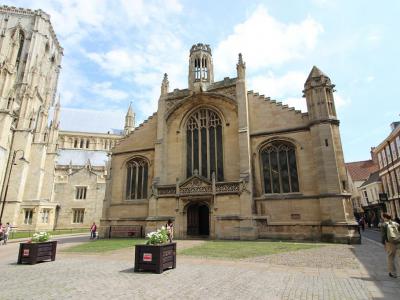 Built between 1525 and 1537, St Michael's replaced an earlier church on the site during the reign of Henry VIII and sits at the end of Petergate in the shadow of the Minster. It is famous for being the place where Guy Fawkes was baptized in 1570 and many visitors come to see the enlarged copy of his baptismal entry in the church's registers.

The exterior is (predictably) executed in Tudor Gothic, and is wide and low. The west front is newer, as it was rebuilt in the 19th century when adjacent houses were demolished.

Inside, there are generous aisles running the length of the church, but the real reason for a visit is to see the fine 18th-century Baroque altarpiece and the collection of late medieval glass: that in the East window dates from the mid-14th century and comes from the previous church, whereas that in the aisles dates from its rebuilding in the mid 16th century, in the Flemish style. There is also an extensive collection of 18th-century monuments and memorials.

Tip:
When the sun is going down this church really does stand out!