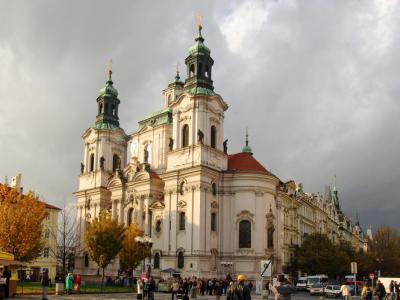 The original Gothic Parish church of Saint Nicholas, founded by German merchants, had stood on this site from the 13th century. In the second half of the 17th century the Jesuits decided to build a replacement, designed by Giovanni Domenico Orsi. The new church was built in two stages during the 18th century. In between 1703 and 1711, the western façade, choir, Chapels of St Barbara and St Anne were erected.

Count Wenceslaus Kolowrat-Liebsteinsky (1634-1659) from the prominent Czech House of Kolowrat was the largest patron of St. Nicholas's and donated his entire estate, worth 178,500 golden talents, for its construction along with the adjacent buildings in Prague's Malá Strana (Lesser Town).

The new plans involved an intricate geometrical system of interconnected cylinders with a central dome above the transept. In 1752, the construction of the church tower was completed. In the following years the church continued to expand. Following the abolition of the Jesuit Order by Pope Clement XIV, by 1775 St Nicholas's had become the main parish church of the Lesser Town.

Matching the external architecture is the interior decoration: impressive frescos by Jan Lukas Kracker and that by František Xaver Palko inside the 70-meter high dome. There are also sculptures by František Ignác Platzer. Saint Nicholas's Baroque organ – over 4,000 pipes up to six metres in length – is famed to have been played by none other than Mozart himself in 1787. Mozart's Mass in C was first performed inside the church shortly after his visit.

The 79-meter Rococo-style belfry, directly connected to the church’s massive dome, affords terrific panoramic view. It was completed in 1751-1756 by Anselmo Lurago.

During the communist era, the church tower was used as an observatory for the State Security as a vantage point to keep watch on the American, Yugoslav and West German embassies.

Daily musical performances in the evening make St. Nicholas's a firm favorite with those who enjoy unique acoustics.