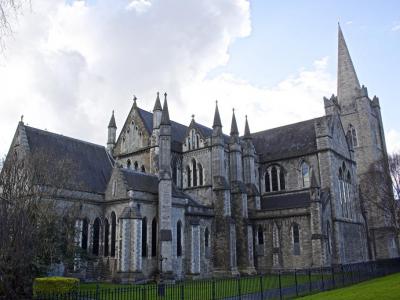 St Patrick’s Cathedral is the largest church in Ireland and one of the oldest. According to legend, the first church was built in the 5th century on the site where Saint Patrick used the water from a well to baptize the newly-converted Christians. The well became known as the Holy Well and the wooden church was built beside it.

In 1192 it was elevated to the status of a cathedral, which was unusual, as the growing city already had one – Christ Church. The present church – with a 43-meter spire – was built between 1199 and 1270.

Throughout 1783-1871, the cathedral had been used as a chapel by the Knights of Saint Patrick, a part of the Order of Saint Patrick, attesting to which are the heraldic banners hanging above the choir stalls. The church is filled with busts, monuments and memorial plaques.

One curiosity is the “Door of Reconciliation”. The story about the door is based more on a legend than fact, though – in 1492, Thomas Butler, 7th Earl of Osmond, and Gerald Fitzgerald, 8th Earl of Kildare, waged war on each other. The Earl of Ormond hid in the cathedral’s Chapter House and the Earl of Kildare had his men cut a hole in the door, through which he put his hand in a gesture of peace.

In the cathedral shop, you can buy CDs recorded by the choir and the organists, books, traditional Irish souvenirs and very pretty silver jewelry.

Why You Should Visit:
A sight to behold; more of a historical place and not so much a 'worshiping' cathedral.
Tours are run by volunteers, for about 45 minutes to an hour, and carry no extra cost.
There is also a very pretty park (church grounds) next door, that is open to the public.

Tip:
Make sure to check online for any scheduled events prior to your visit.