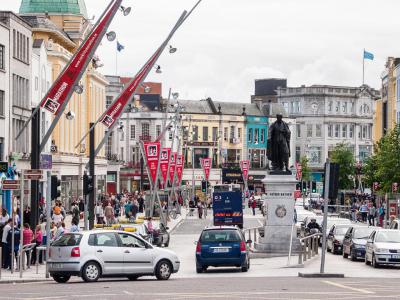 St. Patrick's Street, the main street of the city which was remodelled in the mid-2000s, is known for the architecture of the buildings along its pedestrian-friendly route and is the main shopping thoroughfare. It is dominated at its north end by the landmark statue of Father Mathew. Cork's main shopping street is the most expensive street in the country per sq. metre after Dublin's Grafton Street. Since its redevelopment in 2004, it has twice won the award as Ireland's best shopping street. St Patrick's Street is colloquially known to some locals as "Pana".
Image by Bjørn Christian Tørrissen under Creative Commons License.
Sight description based on wikipedia