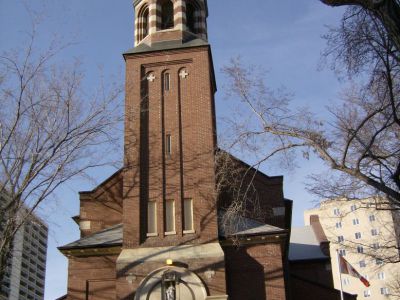 St. Paul's Cathedral is a Roman Catholic Cathedral in Saskatoon. The Cathedral is located in the Central Business District near the river. The cornerstone of St. Pauls's was laid by Sir Wilfrid Laurier. Originally built as parish church, it became a pro-cathedral in 1921, and a full cathedral in 1934 when the diocese of Saskatoon was established. The organ was installed in 1912.

The Institute for stained glass in Canada has documented the stained glass at St Paul’s Cathedral. The stained glass was added in 1945 to commemorate those who lost their lives in World War II and in 1976 for those that lost their lives to a fire. Due to its small size it has been unable to function as a Cathedral since the mid 1990s; when the new Holy Family Cathedral opens, St. Pauls will become a co-cathedral and continue to function as a local parish.
Image by Vic D on Wikimedia under Creative Commons License.
Sight description based on wikipedia