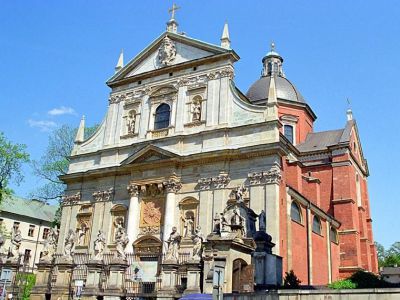 Raised beside the austere St Andrew’s Church is the St. Peter and St Paul’s Church in Krakow. Unlike its neighbor, the Sts. Peter and Paul’s Church stands out with its immaculate facade and famous collection of life size sculptures of the 12 disciples erected at the fence of the Church.

The Church was funded by King Sigismund III Vasa for the Jesuit Order, which had arrived in Poland to stand against the influence Reformation and its ideas. Built during the 16th and 17th century, the Church was constructed with a grand vision in mind, which is probably why the Church was the first Baroque styled building in Poland. It is also speculated that so much was spent on the ornate facade that construction of the entire building was done in plain brick. The project was undertaken by Italian architect Giovanni de Rossiwhich and was taken further by Józef Britius. However, majority of the work done on the Church is credited to Giovanni Maria Bernardoni.

The architecture seems greatly influenced by Church of Gesu which is in Rome. The interior of the church may not be as impressive as the outside albeit, is remarkable. The Church also possesses the longest Foucault pendulum (devise to demonstrate the Earth’s rotation) in Poland, which is brought out for demonstration every Thursday.
Image by Marek and Ewa Wojciechowscy on Wikimedia under Creative Commons License.
Sight description based on wikipedia