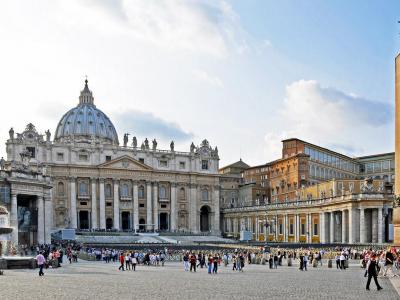 Whether you are a seasoned traveler or a beginner, you will probably never see a church as magnificent as the Basilica of St Peter in the Vatican City. This beautiful church is one of the biggest in the world and is considered one of the holiest places in Rome. The original church was built in 324 AD, commissioned by Emperor Constantine and built over the shrine marking the burial place of the martyred St Peter. St Peter, who has one of the Apostles and considered as the 1st pope, was crucified head-down (at his request, as he felt unworthy to die in the same manner as Christ). Many popes were buried in the basilica between the 4th and 15th centuries.

During the years that the papal seat was located in Avignon, France, the Old Basilica fell into disrepair. In 1505 Pope Julius II decided to have the church demolished and a new one built that would house his tomb, which was enormous. Over the next 120 years, many popes and architects worked on the plans and the basilica grew and grew. Designed principally by Donato Bramante, Michelangelo, Carlo Maderno and Gian Lorenzo Bernini, St. Peter's is the most renowned work of Renaissance architecture and remains the largest church in the world. The famous dome is 42 meters in diameter and 120 meters high. Around the inside of the dome is an inscription which in English reads: "You are Peter, and on this rock I will build my church. ... I will give you the keys of the kingdom of heaven". While it is neither the mother church of the Catholic Church nor the Catholic Roman Rite cathedral of the Diocese of Rome, St. Peter's is regarded as one of the holiest Catholic sites. It has been described as "holding a unique position in the Christian world" and as "the greatest of all churches of Christendom".

The interior of the church is a monument to Late Renaissance design. Vast and richly decorated, you can admire monuments and altars dedicated to numerous kings and popes. Here, you will find Michelangelo’s 'La Pieta' and over 39 statues of saints. In the nave is a circular slab of Imperial Porphyry where Holy Roman Emperors knelt during their coronation. In the crypt, you can see the remains of the early churches that stood on this site. There are also the tombs of many popes, including that of Pope Jean Paul II.

Why You Should Visit:
Intricate architecture and art throughout, with every surface being covered in something beautiful.

Tips:
Go there early in the morning to avoid long lines.
Admission is free (before 5pm when the gates close), but expect to be assessed before entry. Knees and shoulders should be covered (ladies: there are many people selling affordable scarves nearby).
If you are adventurous go up to the top of the dome. An elevator ride saves you climbing 300+ stairs.