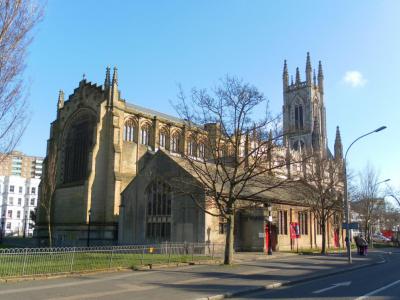 In December 2007, after a long period of consultation, the Diocesan Pastoral Committee recommended to the Church Commissioners that St Peter's should be made redundant. On 8 May 2009, Holy Trinity Brompton Church in London, an influential Church of England parish church which created the Alpha course, agreed to take over its ownership and running. The parish of St Peter, previously merged with that of the Chapel Royal, will be reconstituted as a separate, smaller parish. Services restarted on Sunday 1 November 2009. The Vicar is Archie Coates and the Curate is Jonny Gumbel, son of Nicky Gumbel who developed the Alpha Course.

St Peter's is the proud owner of a large and fine pipe organ built in 1888 for the Hampstead Conservatoire of Music by Henry Willis and brought to Brighton in 1910.
Image by Hassocks5489 on Wikimedia under Creative Commons License.
Sight description based on wikipedia