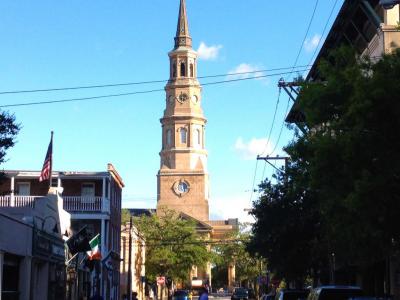 Charleston's second most prominent church, St. Philip's was erected in the 1830s, but its Anglican congregation is a bit older than that of St. Michael's. With a pedigree dating back to the colony's fledgling years, the sublimely beautiful sanctuary – "a building of the highest quality and sophistication" – and two historic graveyards await you in the heart of the French Quarter. The church's imposing tower, designed in the Wren-Gibbs tradition, justifies the National Historic Landmark status.

In the 18th century, this was where Charles Pinckney, a principal writer and signer of the Constitution, a US senator, governor, and minister to Spain worshiped; his grave can be found in the cemetery. Also there is the grave of founding father Christopher Gadsden who designed the famous Gadsden flag bearing the picture of a coiled snake and the words, "Don't tread on me". Moving on to the 19th century, St. Philip's was the church home of US senator, vice-president, Secretary of War, and Secretary of State, John C. Calhoun, who was instrumental in advancing the theory of states' rights. After his death in 1850, he was buried in the former "stranger's churchyard" behind the church; however, with the outbreak of the Civil War, his body was moved to the portion of the cemetery across the street. Eventually, the state of South Carolina erected a huge monument at his grave-site extolling his numerous accomplishments.

Why You Should Visit:
One of South Carolina's most photographed buildings! The iconic, well-maintained graveyard surrounding it is also a must when walking through the neighborhood – the dates on the grave markers are astounding.

Tip:
Be sure to stop across the street at the historically-affiliated French Huguenot Church; both buildings have amazing histories and architecture!