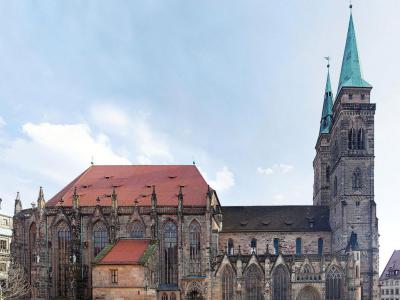 Located at the Albrecht-Dürer-Platz, in front of the old city hall, the St. Sebaldus Church takes its name from Sebaldus, an 8th-century hermit and missionary and patron saint of Nuremberg. It was originally built as a Romanesque basilica with two choirs in the 1230s with the two towers having been added in the 15th century. In the middle 17th century, galleries were also added and the interior was remodeled in Baroque fashion.

The church suffered serious damage during World War II and was subsequently reconstructed. Some of the old interior did survive, including the Shrine of St. Sebaldus, works by Veit Stoss and the stained glass windows. The church had an organ by the 14th century, and another by the 15th.

The main organ had been built in 1440–41 by Heinrich Traxdorf, who also built two small organs for Nuremberg's Frauenkirche. Until its destruction in the 20th century it was one of the oldest playable organs in the world, and all the more notable because Traxdorf was one of the first organ builders to depart from the Gothic Blockwerk organ by dividing the windchests and separating the front stops into Flute (Principal) and Octave (see pipe organ).

Why You Should Visit:
Great atmosphere that puts you back into medieval times! Also in a beautiful area, just off the northwest corner of the Main Market.

Tip:
Admission is free at the public church tours, although donations are appreciated. For tower tours, the fee is €5 (children €2).
Several times a year, the church and tower are open until late at night, as part of the "Blue Night" festivities in Nuremberg.

Despite Nuremberg's storybook appearance, the city's not so distant past is rather dark. Back in 1933, amid the rise of the Third Reich, the Nazis worked really hard to leave their stamp on the city, prettifying it and renovating the architecture in a bid to accommodate their massive rallies and bombastic military parades.

In fact, no other city in Germany is more intertwined with the...  view more

The most "German" of all cities in Germany, Nuremberg has witnessed many historic events in its lifetime. Sadly, the first thing immediately associated with Nuremberg is the rise of the Third Reich, the Nazi rallies, and the postwar trials over the Nazi leaders. Indeed, the city was favored by Hitler, who planned to build here a grandiose architectural complex for his party.

The historical center of Nuremberg, Old Town (German: Altstadt) is easily differentiated from other parts of the city. Divided in two by the Pegnitz River, the district represents a complex architectural ensemble with a maze of historical lanes (e.g. Weissgerbergasse) packed with half-timber houses, linked by centuries-old bridges, such as Maxbrücke, and set against the picturesque backdrops of...  view more