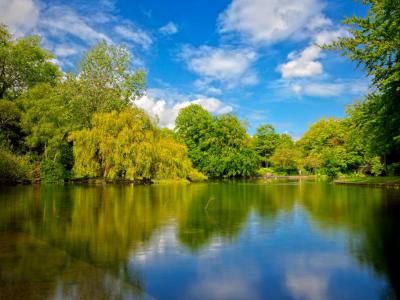 If you don’t want to wait your turn in one of the busy restaurants in the shopping center, the best thing to do is to pick up a sandwich and a drink, and take it to Saint Stephen’s Green Park on the south end of Grafton Street.

This 27-acre park is the biggest of Dublin’s Georgian square parks. It was laid out in 1880 by Sir A. Guinness and is a delightful area to have your lunch, with its flower beds, shady walks, fountains and benches round a large ornamental lake where you can feed the ducks. In the summer, open-air concerts are often held here.

The rectangular park is surrounded by stately Georgian houses and is noted for its many statues and memorials. The former include a statue honoring Sir A. Guinness; a bronze statue of Theobald Wolfe Tone surrounded by monoliths (the locals call this “Tonehenge”); a fountain statue of the Three Fates, donated by German refugees after the Second World War; a statue of Robert Emmet and busts of James Joyce and Constance Markievicz.

Among the memorials there are the Yeats Memorial Garden with its statue by Henry Moore; the Fusiliers Arch, a memorial to the Royal Dublin Fusiliers who died in the Second Boer War; a monument to Jeremiah O’Donovan Rossa, the Fenian leader and member of the Irish Republican Brotherhood, and a memorial of the Great Famine that caused so much death and misery in Ireland between 1845 and 1850.

Why You Should Visit:
Beautiful, cosy and tranquil park. There are lovely little ponds with swans and ducks, and plenty of places to sit.
Many cafes nearby, just down the road, where you can pop in for a cake and coffee/tea before or after your walk.