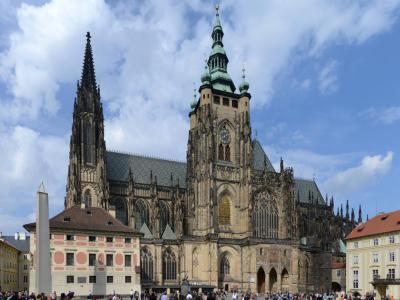 Situated on the grounds of the Prague Castle, St. Vitus Cathedral, a Gothic masterpiece, is considered by many to be the seat of Bohemian national identity. With the tombs of numerous Holy Roman Emperors and Bohemian kings, it is easy to see why this is the case. Beyond this history, you have the sheer beauty of the structure with its imposing and elaborate exterior, majestic nave and ravishing stained-glass windows all combining to create a moving aesthetic.

The exterior is characterized by the prominent Great Tower, topped with a baroque dome and home to Sigismund – the largest bell in all Bohemia, made in the mid-16th century and weighing well over 33,000 pounds. To the right of the tower you will find the cathedral's southern doorway, which formerly operated as the main entrance. Known as the Golden Gate, it is unmistakable due to the large multicolored Venetian-glassed mosaic depicting the Last Judgment.

Inside, the majestic, soaring nave is overwhelming at first, and the stained-glass windows on the left add an ethereal quality to an already other-worldly atmosphere. Admire the third window – an exquisite work by the Art Nouveau great Alfons Mucha, which tells the entire history of Christianity in the Czech lands – from the first missionaries to modern times – with swirling figures, vibrant colors, and powerful symbolism. Other items of interest include the wooden panorama of Prague, the tomb of King Wenceslas, and all kinds of decorative elements ranging from the elaborate to the whimsical.

Why You Should Visit:
The crown jewel of Prague Castle, this would be a major attraction even if it were standing alone a mile away.

Tip:
You can visit the exterior and view part of the interior without a ticket. To view the cathedral properly, however, purchase a ticket as part of one of Prague Castle's visit options. There's a also a separate charge to climb the tower – quite a tough climb with lots of steps and fairly narrow, but views from the top are amazing and the clock and bells are visible as well.