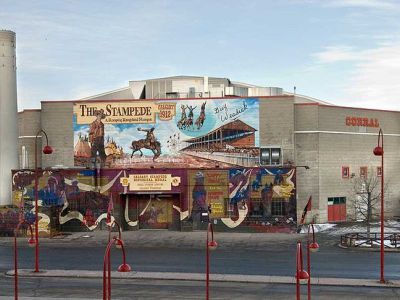 If you are interested in rodeo and ice hockey, you must visit Stampede Corral or Calgary Corral in Calgary, Alberta, Canada. This arena was constructed in 1950 to replace the Victoria Arena. Since then it has been a home to the Calgary Stampeder’s Hockey Club.

This arena hosts the annual Calgary Stampede and has a seating capacity of 6,475. Currently, the arena also houses the United FC indoor soccer club and is managed by the Calgary Stampede non-profit organization. This soccer club takes part in the Canadian Major Indoor Soccer League.

The first ever hockey game played here was on 26th December 1950. During that game, part of the Western Canada Senior Hockey League, the Corral Stampeders defeated the Edmonton Flyers 5:0. Since then, this arena has hosted many prestigious tournaments, among which the 1988 Winter Olympics figure skating and ice hockey events and World Figure Skating Championship in 1972. Quite often, the Stampede Corral also hosts Canada’s Davis Cup tennis team.

During the Calgary Stampede, the arena comes alive with the wrestling super shows. On your visit here, do not miss going through the extensive Canadian private sports photo collection. This collection is on public display. Among other notable events held regularly at the Stampede Corral arena are the Superdogs held during Calgary Stampede and Exhibition, and the Rodeo Royal held in April.
Image by Chuck Szmurlo on Wikimedia under Creative Commons License.