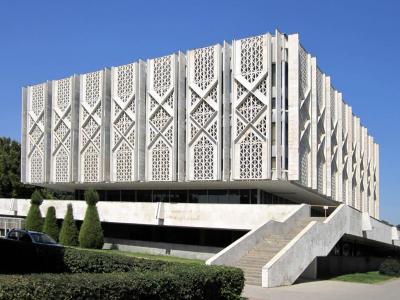 The State Museum of History of Uzbekistan, originally known as the National Museum of Turkestan, was founded in 1876. It is the oldest, and also the largest, museum in Central Asia. It came into being upon the initiative of a group of Russian scientists, members of the Turkestan branch of the Moscow Society of Lovers of Natural History, Anthropology and Ethnography.

During the 20th century, the museum repeatedly changed its location. Currently, it occupies the former quarters of the Lenin Museum, purpose-built in 1970 as the Tashkent branch of the Central Museum of Vladimir Lenin in Moscow to mark the 100th anniversary of the founder of the Soviet state.

Simple, but monumental, almost square in plan, this building looks light and is well visible from all sides. It has four above-ground and two underground floors with an introductory hall and exposition rooms (on the two upper floors). The overhanging upper part of the edifice is lined with openwork Panjar-style panels, which simultaneously serve as enclosing structures and sun protection.

The museum's collection accounts for more than 250,000 exhibits in the field of archaeology, history, and ethnography, dating from the Stone Age to the present day, asserting Uzbekistan as one of the key centers of Eastern civilization. The displayed artifacts, found in the country, are unique and include ancient ceramics and fabrics, a large number of ancient coins and burial relics, as well as some rare archival materials, manuscripts, historical documents and photographs. The Muslim section of the museum features calligraphy pieces and regal edicts dated from the Tamerlane dynasty to the last emirs of Bukhara.

There is also a wealth of ethnic art, household items, and costumes from different parts of Uzbekistan. Among them is a large bronze Saka cauldron, decorated with animal figurines, dated from the 4th-5th centuries BC, and the sculpture of the Buddha from the 1st century AD, found during archaeological dig in the Surkhandarya region.

All of these and more allow visitors a chance to learn about the history of both the Uzbeks and other peoples who used to inhabit, and still do, the territory of Central Asia and particularly that of modern Uzbekistan.
Image Courtesy of Wikimedia and David Stanley.