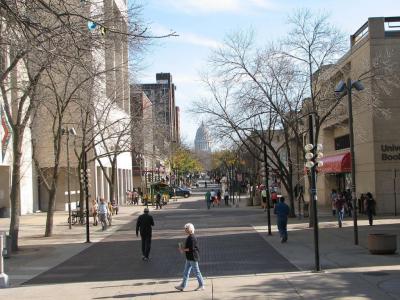 State Street in Madison provides a crucial link between the campus for the University of Wisconsin-Madison and State Capitol Square. This street is a pedestrian mall, closed to car traffic. With this street connecting two of the city's major "anchors", there are plenty of stores and restaurants that are worth your time.

Local boutiques are some of the most popular types of shops represented on this street. Check out some of the great-smelling soaps and aromatherapy products at Soap Opera, find out what record is popular at Jazzman, or see what craft items you can buy at Anthology.

If you feel like grabbing something to eat, there are a lot of excellent options. Try Parthenon Gyros for gyro sandwiches and other Greek specialties, drop by Mackesey's Irish Pub for sandwiches and 14 beers on-tap, or State Street Brats for bratwurst and other local favorites. You won't leave this area feeling hungry.
Image Courtesy of Wikimedia and Neonuevo.

Want to visit this sight? Check out these Self-Guided Walking Tours in Madison. Alternatively, you can download the mobile app "GPSmyCity: Walks in 1K+ Cities" from iTunes App Store or Google Play. The app turns your mobile device to a personal tour guide and it works offline, so no data plan is needed when traveling abroad.

The city was named after President James Madison and made the state...  view more