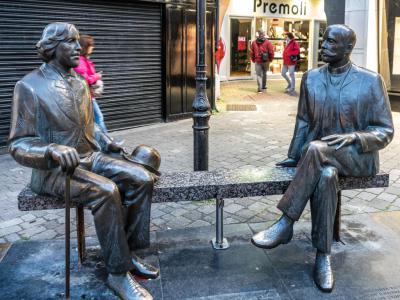 In front of Matt O'Flaherty's pharmacy and Lazlo's Jewellry shop on William Street in Galway city, two famous writers sit on a bronze bench engaged in silent conversation. The two writers are Oscar Wilde, famous, if not notorious, and Eduard Vilde, known but only to God and fans of Estonian literature.

These two men never met or communicated in any way, yet here they sit, eye-to-eye almost, silently sharing ---what? Both men were rebels, each in his own way. Wilde suffered for sexual freedom. Vilde was a critic of Tsarist repression and German landlords. What might these two frozen figures be saying? What can be imagined?

Wilde is memorialized in an outdoor sculpture by Danny Osborne in Merrion Square in Dublin, and in another outdoor piece by Maggi Hambling in London. Then there is always the Wilde tomb in Pere Lachaise cemetery in Paris. The statue of Eduard Vilde is a copy of the original, cast in 1999 in Tartu, Estonia by Tiiu Kirsipuu.

Visitors like to share the bench with the two writers (there is room between them). They take photo ops, and have imaginary one-way conversations with the stolid authors. Buskers seldom pass up a chance to join in with a little music and conviviality. Oscar silently holds his hat and cane. Eduard sits in pensive repose.
Image Courtesy of Flickr and William Murphy.