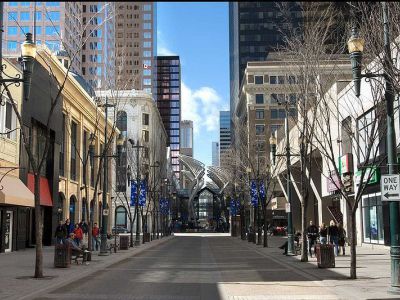 Downtown Calgary is where all the action is and this is the hub of Calgary shopping and sightseeing. On your trip to this city, you must not miss a visit to the major pedestrian mall Stephen Avenue.

This street features some of the best cafes, bars, pubs and finest restaurants. If you love shopping this is where you must be. Stephen Avenue is a shopper’s delight with its high end retail stores and exclusive boutiques.

Some of the major shopping centers here include The Bay Department Store, Scotia Center, Fashion Central, Bankers Hall and The Core Shopping Center. Other attractions located on this street include hotels such as Calgary Marriott and Hyatt Regency Calgary and the famous Telus Convention Center.

Stephen Avenue is also where you can find many ancient, historic buildings. In 1992, the Canadian government declared this street as a Canadian historic site. Stephen Avenue got its name from the first Canadian Pacific Railway president and the first Baron Mount Stephen, George Stephen.

As you walk around the street, you will be impressed by the majestic, sandstone buildings that were built specifically to withstand fire following the 1886 fire that damaged most of the city. Remember to enjoy a visit to this popular street on your trip to Calgary.
Image by Chuck Szmurlo on Wikimedia under Creative Commons License.

Want to visit this sight? Check out these Self-Guided Walking Tours in Calgary. Alternatively, you can download the mobile app "GPSmyCity: Walks in 1K+ Cities" from iTunes App Store or Google Play. The app turns your mobile device to a personal tour guide and it works offline, so no data plan is needed when traveling abroad.

This tour is all about Calgary's outdoor sculptures: some of them weird, some of them outstanding, some of them merely amusing. You won't find imposing grey monuments with tones of history behind them. It's all about those small unrevealed sites in tourist handbooks, those colourful places captured in photos. Take this self-guided walking tour and discover Calgary's creative...  view more

As the biggest city in Alberta, Calgary has quite a few things to show its visitors – the beautiful Old City Hall, the amazing collection in the Glenbow Museum, and the ever present Calgary Tower, just to name a few. Take this self-guided walking tour to discover the Calgary downtown with its rich cultural and historic heritage.

Calgary is the largest city in Western Canada and one of the most popular tourist destinations in the country. The city was named after a hamlet with the same name on the Isle of Mull, Scotland.

The area that is called Calgary today was once populated by indigenous people, now known as the First Nations, until Europeans arrived in the 19th century.

This self-guided walking tour is to discover Inglewood, a friendly and picturesque neighborhood on the bank of Elbow River. Explore the natural pearls of Calgary by visiting the Bird Sanctuary or the Bow Habitat Station, and learn about the history of the city at Fort Calgary. Take this tour and enjoy a stroll in central Calgary.