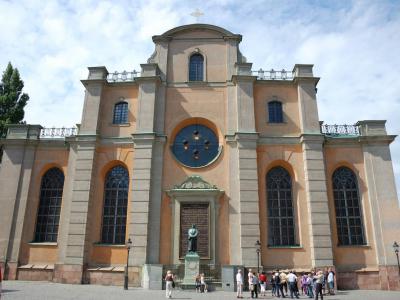 Stockholm Cathedral, otherwise known as the Church of St. Nicholas or the Great Church, is a brick Gothic-style structure in the heart of Stockholm that is said to have been built by the city's founding father, Birger Jarl. The church served the Roman Catholic community until 1527, upon which it was converted to Lutheran Protestant. Late into the Middle Ages, it was once again retaken by Roman Catholics and, to this day, remains under the governance of the Archdiocese of Stockholm. The cathedral has been the preferred site for many ceremonies and celebrations in Sweden, including royal weddings, funeral services, and coronations.

Visitors to the place will want to see the large wooden statue of Saint George and the Dragon, which was carved in the 15th century. The statue is also a reliquary and, today, contains relics of the favored local saints. The pulpit was carved by Burchard Precht and is an excellent example of French Baroque style. The front of the pulpit portrays the biblical story of Matthew 15:21-28, the Canaanite woman; while the door of the pulpit displays a superb depiction of the head of Jesus Christ. The church is lined by special royal pews, which are adorned in blue velvet embroidered upholstery.

Why You Should Visit:
Architecturally interesting, culturally enriching, and very peaceful.

Tip:
Check for free organ recitals (usually at noon) and other events.
Make sure to pick up a brochure as it is very helpful in explaining several main focuses within the cathedral.

Opening Hours:
Daily: 9am-4pm; extended hours on weekdays until 5pm in June-July and 6pm in August
Image by Cha già José on Flickr under Creative Commons License.
Sight description based on wikipedia