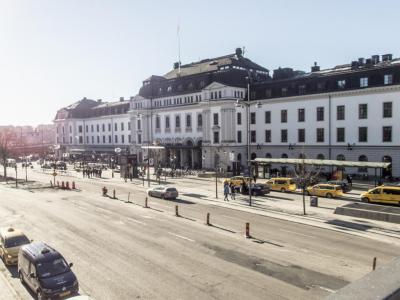 Stockholm Central Station (Stockholms centralstation) is a railway station built between 1867 and 1871 to the design by architect Adolf W. Edelsvärd. Opened on 18 July 1871, it used to serve daily over 200,000 visitors, including almost 170,000 travelers. As of 10 July 2017, the local commuter trains have been calling at the nearby Stockholm City Station.

Prior to 1925, the railway tracks had led straight into the station, but during a 1925-1927 renovation they were diverted to the west, and the former track hall was converted into a spacious – 119 meter long, 28 meter wide and 13 meter high – waiting hall. During the renovation, the station itself was also extended to the south through the construction of the southern pavilion; this part of the building now houses a conference facility. Next to it is the Royal waiting hall used by the Royal Family when traveling by train.

In 1951, the facade towards Vasagatan was changed to a more simplified look. In 1958, an underground passage to T-Centralen was opened. In 2011, Jernhusen real estate company found a way to channel the body heat from the hordes of commuters passing through the Central Station to warm another building that is just across the road.

Ringen ("the ring"), in the centre of the ground floor, is one of the station's most distinctive features. Locals jokingly refer to it as spottkoppen ("the spittoon"). The front facade of the station was renovated in summer 2012, upon which the statue of Nils Ericson – Swedish mechanical engineer and prominent railway builder – outside the main entrance was fitted with ear mufflers and accompanied with a text: Jäsicken hvilket oväsen ("Oh my gosh, what a noise").
Image Courtesy of Wikimedia and I99pema.
Sight description based on Wikipedia.