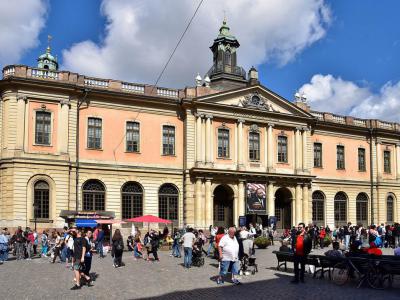 Owned by the Swedish Academy, the Stockholm Stock Exchange Building is located in the old part of Stockholm. The building has been used by the Swedish Academy while chooseing the winners of the Nobel Prize for Literature, since its inception in 1901. The building, now known as the Stockholm Stock Exchange Building, was built for the bourgeoisie. The bottom floor once was used as the trading floor and the upper floor was a large scale ballroom. The Academy chose the ballroom for it’s use purely because of its size. The building is home to the Nobel Museum and the Nobel Library. As the home of the Stockholm Stock Exchange, which was the main financial securities trading agency, it has been an active part of the Swedish business community over the years. However, recently the stock exchange merged with the Helsinki Stock Exchange and now operates from other office space. The stock exchange was founded in 1863. The Nobel museum is a fantastic opportunity for visitors to explore the history of the Nobel Prize, since its beginnings in 1901. In addition to a history of the prize, guests will be able to explore the life of its founder, Alfred Nobel. The museum hosts a huge selection of exhibitions which include films, dramas and scientific experimentation.
Image Courtesy of Wikimedia and Bahnfrend.
Sight description based on Wikipedia.